Based on actual events, Season of Regret is a reflection of events stemming from World War II.  With a haunting melody and poignant lyrics, this song expresses the longing of a German soldier, forever separated from his family, and his only desire to go home again.

Artur Labermaier: A real story, I was told by my grandmother about my grandfather. 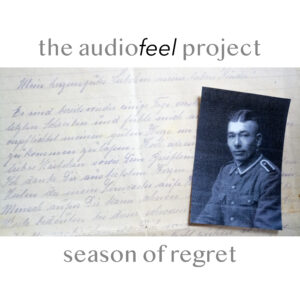 I came across a letter that spoke about the war,
how life could still get better than what went on before.
We were sold a promise that the sun would never set,
Instead we felt the anguish in the season of regret.

There’s no consolation in confronting all our fears,
no anticipation it would last so many years
Season of regret.

Grandpa, woke from sleeping, by a Russian soldier man.
„Your troop’s behind the mountain, I’ll help you if I can.”
But, wound up in a gulag, eventually in time.
And, then became a prisoner inside of his own mind.

No one there to love him in a cell so cold and wet.
Thinking of his family and the horror that they met.
Season of regret.

A lesson for your children, so they will not forget,
Another sorry chapter in the season of regret.
Learn to love each other, and feel each other’s pain.
So grandpa’s death in prison, would not have been in vain.